As the global economy trembles, investors continue to find sanctuary in stablecoins. In the most recent 12-month period (ending April 29, 2020), the three top stablecoins — Tether (USDT), Circle (USDC) and Paxos (PAX) — increased their market capitalization by 161%, 191% and 146%, respectively. 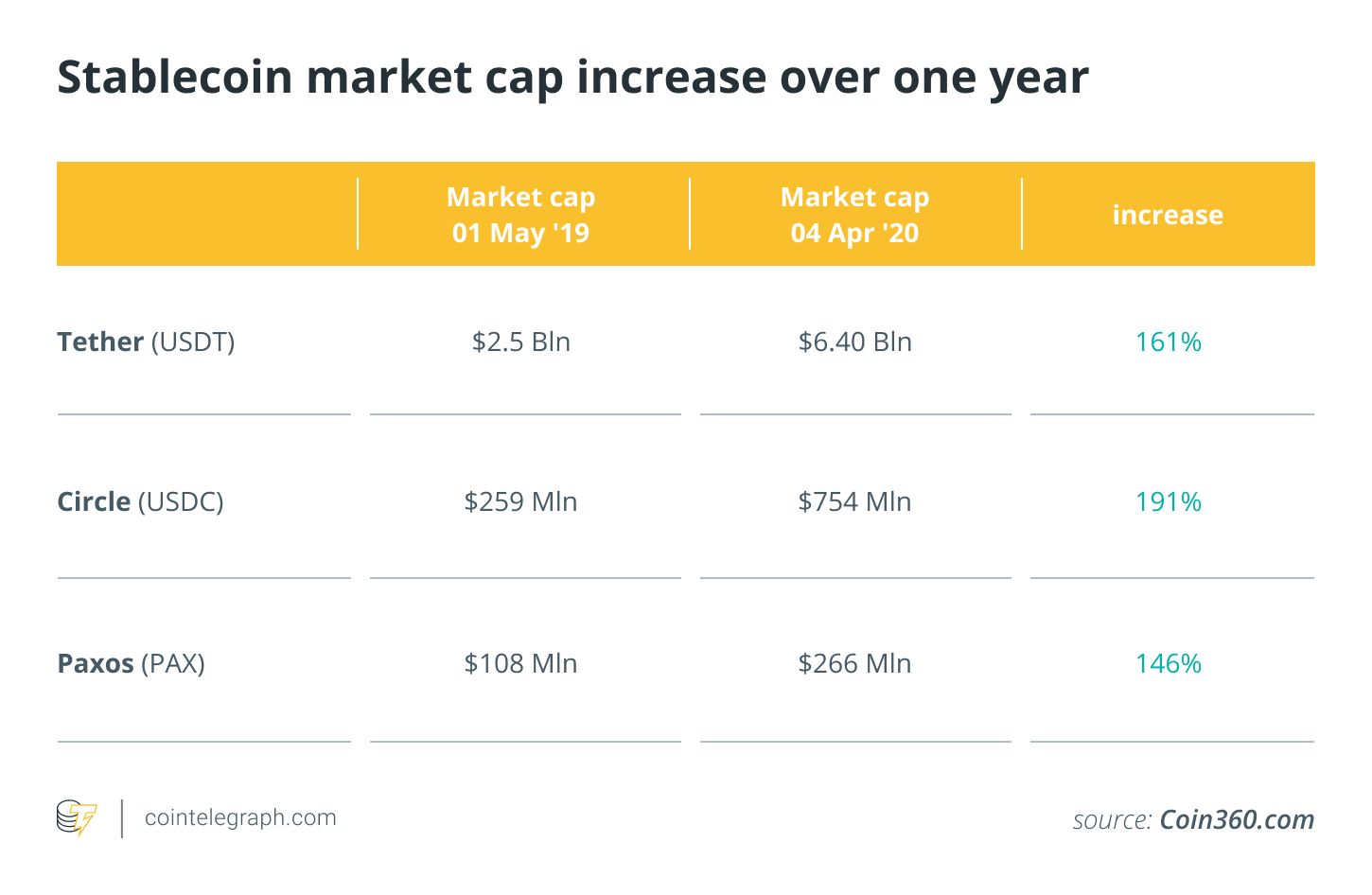 Kim Grauer, head of research at Chainalysis, told Cointelegraph that with the use of a different metric, “We can confirm a 250% increase in the amount of Tether moved on-chain in the past 12-months (ending March 2020),” and the growth isn’t all front-loaded, either.

As COVID-19 raged, President Trump declared a national emergency in the United States on March 13, and for that month, the three largest stablecoins each notched month-on-month on-chain growth of 50% or higher. 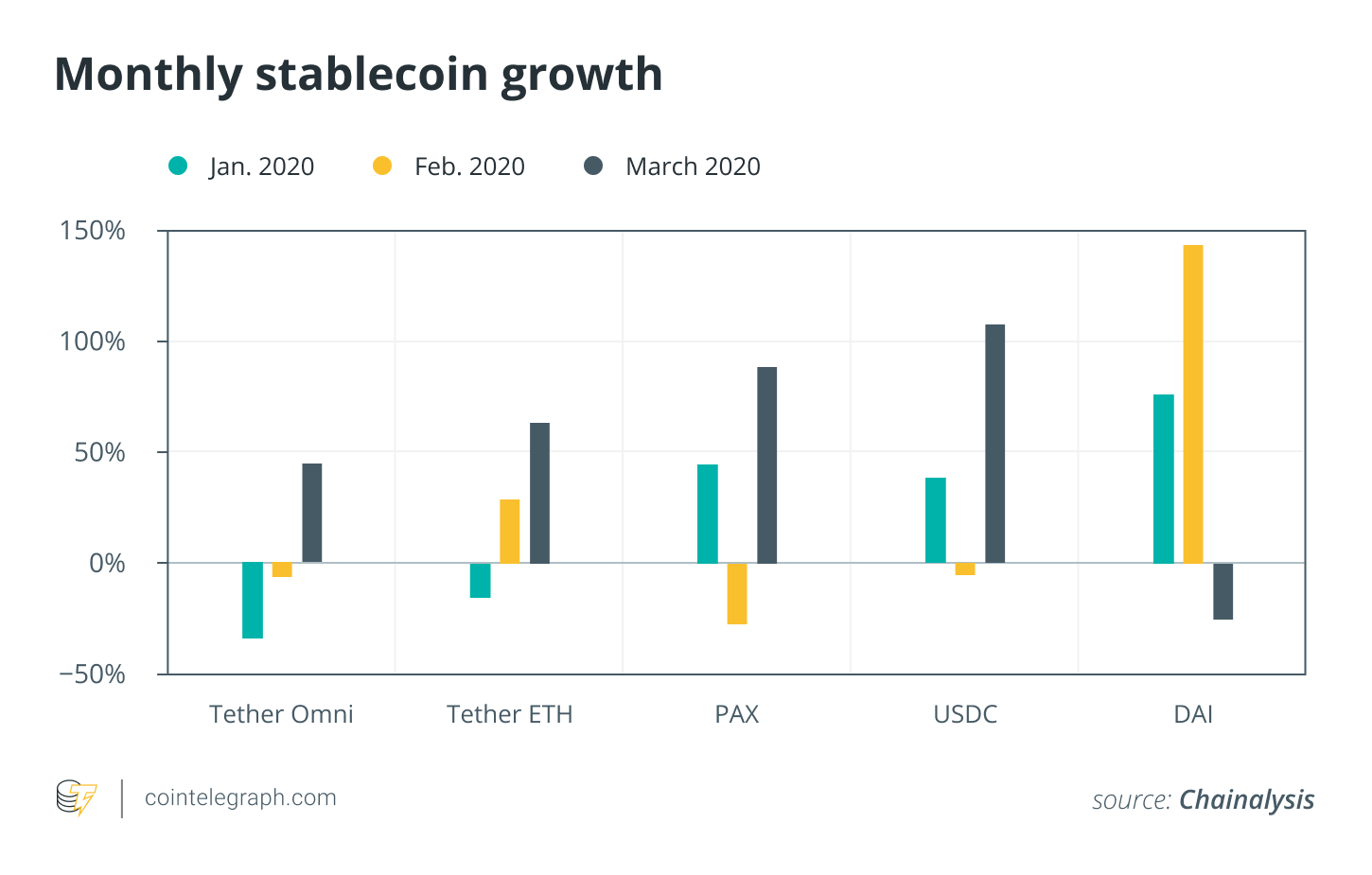 Talking to Cointelegraph, Binance chief compliance officer Samuel Lim shed some light on the likely causes of such growth. “Stablecoins have been used more frequently in trading due to huge market volatility in the past year,” he said, “but apart from that, we have also seen an increase in its public adoption and usage.” In reference to Tether’s growth in particular, Lim added:

“The issuance of USDT has increased greatly, but its market share is gradually decreasing, which means other stablecoins have been growing phenomenally — not to mention that it [USDT] may face potential competition from CBDCs [central bank digital currencies] or even the likes of Libra.”

Are other industry representatives confounded by the continued growth? “It’s not surprising to me,” Cred CEO Dan Schatt told Cointelegraph, “we’ll see more of this, with the current state of the financial markets. There is a strong interest in the dollar, and it’s much easier to acquire dollars through crypto assets.”

COVID-19 has done nothing to disrupt stablecoins’ advance on non-pegged digital coins (i.e., non-stablecoin crypto). “Compared to the top 5 non-stablecoin assets (BTC, ETH, LTC, BCH, and XRP), the stablecoins we track saw higher month-over-month growth from February to March in terms of on-chain transaction volume,” Grauer told Cointelegraph. She elaborated, “The flight to stablecoins suggests that people may be deliberately looking to store value in traditional fiat assets, namely the USD.” Adding to this sentiment, Gregory Klumov, CEO of Stasis, which issues the EURS stablecoin, told Cointelegraph:

“You can track the outstanding circulating amount of issued stablecoins, and during the first wave of a crypto market correction in early March, there was a significant issuance of stablecoins. That’s exactly the outcome that is expected: people were relocating to stablecoins, reducing the volatility of their crypto portfolio.”

A flight to safety is one common explanation. But there may be other considerations amid the coronavirus pandemic, some even hygienic, as Klumov went on to add, “People may start treating things they touch differently. For example, they will prefer to make digital payments and perform cashless interaction.” This is a significant trend for stablecoins in his view. Users can download crypto wallet apps and “get a checking account in dollars or euros by receiving and sending the same stablecoins.”

Asked to explain the recent stablecoin upsurge, Preston Byrne, partner at law firm Anderson Kill, told Cointelegraph, “It’s because people want dollars, and stablecoins are one form of exposure to dollars in places that don’t have direct access to the U.S. banking system or the means of holding physical cash.” Not all stablecoins are created equally, though, “There are really two different types of stablecoins: audited schemes, like Paxos and Circle, and unaudited ones like Tether,” Byrne said, adding:

“Paxos and Circle have likely seen increased adoption by market participants looking for a crypto-native alternative to ACH [automated clearing house] to make payments and settle debts, or simply a quick and easy way to convert crypto to USD. Tether’s market cap has ballooned to the stratosphere, but until Tether passes an audit conducted by a reputable firm, prudence dictates that I can’t believe their numbers.”

Byrne has been critical of stablecoins in the past, especially crypto-collateralized stablecoins (such as DAI), which he once described as “the perpetual motion machines of modern finance.” He also wrote, “A stablecoin that is collateralized by itself is a complex and fragile ‘Nakamoto Scheme’ doomed to fail.” Asked about this, Byrne said, “Stablecoins that fail to do those things or which cut corners on regulatory compliance are a bad idea,” further sharing with Cointelegraph:

“DAI faces numerous compliance challenges, starting with money services business licensing and continuing to a total lack of investor protections, as seen in recent events where DAI CDP [collateralized debt position] holders got wiped out due to a black swan drop in the price of Ether and network failure. That wouldn’t happen with a Paxos or a Gemini.”

For the record, DAI’s market capitalization increased by 38% over the past 12 months, which would be enviable growth under most circumstances, though it now pales beside the increases exceeding 140% notched by the top three stablecoins over the same period.

Melikhov added, “These stablecoins are dependent only on the [underlying] technology and its embedded algorithms. They are free from third-party risk and may be even safer than their centralized analogs.” Tether, of course, remains the gorilla in the room, with a market cap more than eight times that of the number two stablecoin. Regarding Tether, Grauer noted:

She added that 65% of Tether value was transferred in transactions that were over $100,000 each. “This confirms some speculation that a large source of the demand for Tether likely comes from professionals, probably based in China, where there is no fiat available to onramp into the crypto market.” Approximately 50% of Tether’s activity in March was sourced directly to China-based exchanges Huobi and OKEX, added Grauer, while Binance sourced nearly 30% of the Tether present on the Ethereum blockchain. 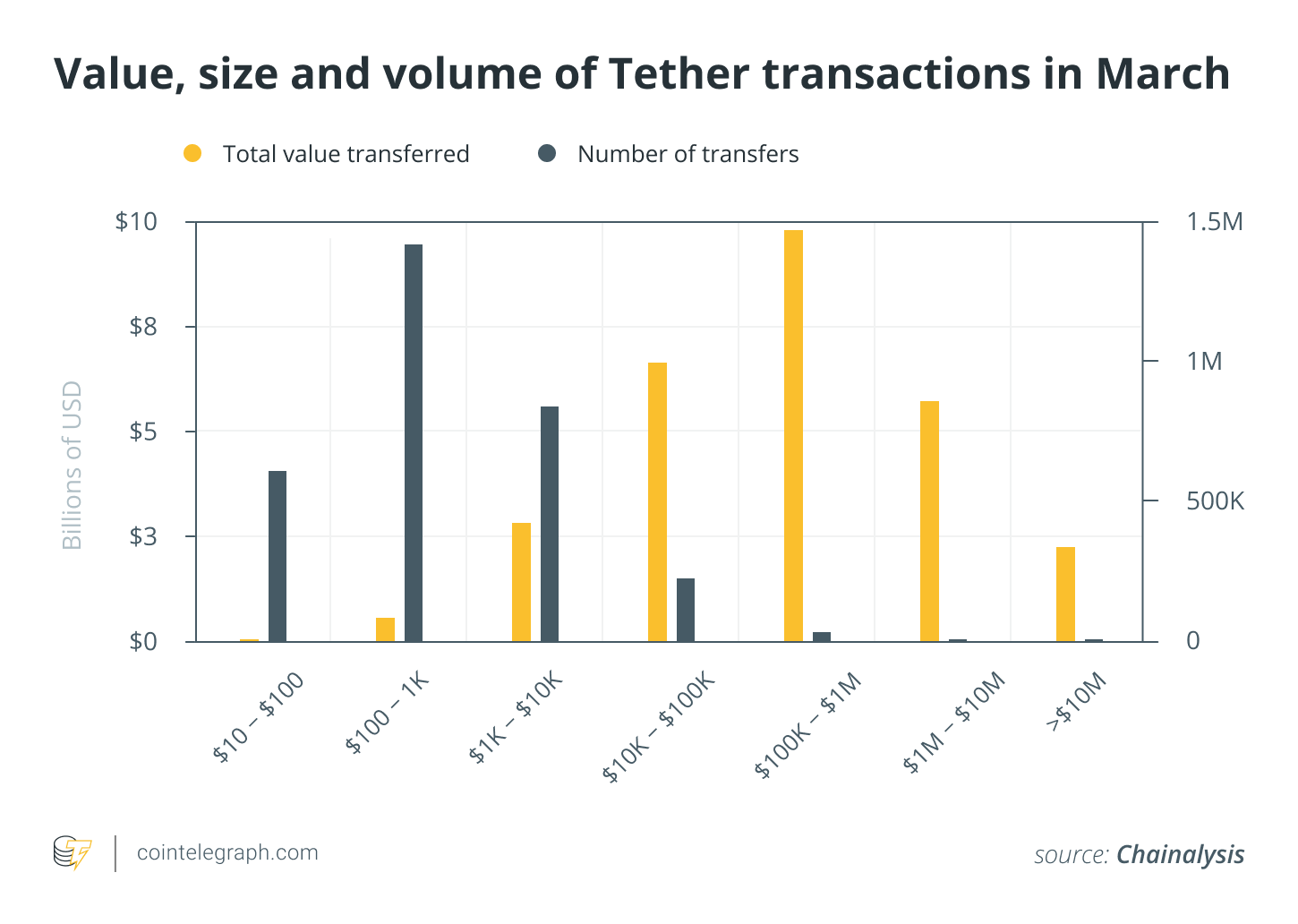 What, if anything, could derail stablecoin growth? “Most of the Tether demand is coming from the Asia region,” continued Grauer, “so a future regulatory crackdown could be felt by stablecoin users. But we have seen a resilience to these types of moves in the APAC region.” When the Chinese government banned the use of yuan for crypto purchases, for instance, many users simply shifted to Tether. On the matter, Lim believes that:

“Either way we believe they [i.e., stable and non-stable coins] can coexist, as their target audience might even be different. And needless to say, the crypto market is still very small when compared to the traditional fiat market. All it takes is for a small percentage of the flow of funds from the traditional world to enter this space and we will see a tremendous explosion of growth and adoption in our industry.”

Schatt added that more stablecoins are now emerging with higher standards and that are truly substantiated 1:1 with auditable transparency pages. He went on to say, “Those that cannot obtain a certain level of liquidity, transparency and auditability will be more susceptible to market crashes.”

Speaking hypothetically, Melikhov believes that a failure of Tether could still have a drastic impact on the crypto sphere, “but the stablecoins market is slowly becoming more diversified as existing Tether alternatives become more mature.” In the future, a major stablecoin failure could simply result in the rise of an alternative stablecoin project — that is, one to take its place, he suggested.

Should the current run continue, can the stablecoins’ collective market capitalization eventually surpass that of Bitcoin, currently at $165 billion? “It’s possible,” said Schatt, “as we are already seeing more use cases for stablecoins — settlement of M&A and POS transactions. Connecting stablecoins to the several trillion dollar retail commerce market can significantly light up the prospect for stablecoins.” Lim, on the other hand, told Cointelegraph that “It is too early to tell,” adding:

“Stablecoins are a bridge between the traditional fiat world and the crypto world, and we are all aware the fiat world is significantly larger. There is certainly room for growth within the stablecoins space and we strongly believe demand will only grow larger as institutional interest begins to pick up.”

There is only a finite supply of Bitcoin, too — a restriction not imposed on stablecoins. Market cap, of course, has its limitations as a measure of size or success, especially if governments enter the stablecoin arena. “If China or the U.S. create their own stablecoin, you will see how it is easy for them to overcome the market capitalization of Bitcoin,” Paolo Ardoino, chief technical officer at Bitfinex exchange, told Cointelegraph.

“It is probably more meaningful to look at the amount of on-chain activity that we see, and right now stablecoins account for less than half of the activity of Bitcoin,” suggested Grauer. In any event, “the success of stablecoins and the success of other cryptocurrencies are not separate stories; they support each other,”she said.

Bitcoin Price Drops to Key Level as 100% Rally Since Crash…

After BTC’s Best Day In Months, Bitcoin is Blowing Up on…

Stocks making the biggest moves in the premarket: Exxon,…

US Bitcoin Holders Worry About Chinese Control of the Mining…

German companies may be passing on Bitcoin for lack of…

Stocks face headwinds as investors look forward to a big…

BTC whales warn: Upsurge in the price is an Organized FOMO

New York City’s subway system may turn to the Federal…

Disbelief? Charts Suggest This Chainlink, Ether Rally Is Not…